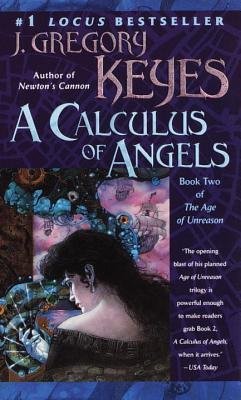 1722: A second Dark Age looms. An asteroid has devastated the Earth, called down by dire creatures who plot against the world of men. The brilliant– some say mad–Isaac Newton has taken refuge in ancient Prague. There, with his young apprentice Ben Franklin, he plumbs the secrets of the aetheric beings who have so nearly destroyed humanity.,,But their safety is tenuous. Pet….Read More
Alternative History American Fantasy Fiction Science Fiction Steampunk Fiction
Amazon
goodreads

4 Books Similar to A Calculus of Angels (The Age of Unreason, Book 2)

In the kingdom of Crotheny, two young girls are playing in the tangled gardens of the sacred city of the dead when they stumble upon the unknown crypt of a… Continue Reading Posted in: American, Fantasy Fiction, Good And Evil, Sisters
Info / Amazon
More Books like this

Journey into darkness - Determined to seek out and destroy the source of the fae-borne evil that is rapidly strengthening its control over the world called Erna, Damien Vryce, the… Continue Reading Posted in: Fantasy Fiction, Good And Evil
Info / Amazon
More Books like this
Facebook Twitter Pinterest LinkedIn