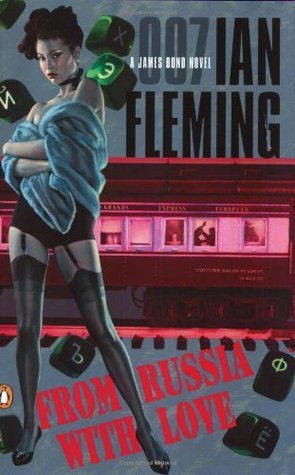 Ian Fleming’s fifth James Bond novel.,,James Bond is marked for death by the Soviet counterintelligence agency SMERSH in Ian Fleming’s masterful spy thriller. It’s the novel that President John F. Kennedy named as one of his favourite books of all time.,,SMERSH stands for ‘Death to Spies’ and there’s no secret agent they’d like to disgrace and destroy more than 007, James Bond….Read More
Fiction Mystery Thriller
Amazon
goodreads

9 Books Similar to From Russia With Love

"Her hair was black and fell to her shoulders. She had high cheekbones and a sensual mouth, and wore a dress of white silk. Her eyes were blue, alight and… Continue Reading Posted in: Fiction, Spy Thriller, Thriller
Info / Amazon
More Books like this

‘For several minutes he stood speechless, his eyes dazzled by the terrible beauty of the greatest weapon on earth’,,He’s a self-made millionaire, head of the Moonraker rocket programme and loved… Continue Reading Posted in: Fiction, Spy Thriller, Thriller
Info / Amazon
More Books like this

Auric Goldfinger is the kind of man Bond loves to hate: cruel, clever, frustratingly careful - a cheat and a crook. So Bond relishes his mission to discover what this… Continue Reading Posted in: Illustrated Wrappers (Book Covers) England 2004, Paperbacks England 2004, Robbery
Info / Amazon
More Books like this

James Bond: Spy Who Loved Me

Librarian's note #1: this entry is for one of the editions that includes the fourth story, "007 in New York." For other editions with only three stories, see: https://www.goodreads.com/work/editio...,,Librarian's note… Continue Reading Posted in: Fiction, Spy Thriller, Thriller
Info / Amazon
More Books like this

For your Eyes Only

"Bond watched her as she reached the edge of the tables and came up the aisle. It was hopeless. She was coming to meet someone—her lover. She was the sort… Continue Reading Posted in: English Fiction, Intelligence Officers, Intelligence Service
Info / Amazon
More Books like this
Facebook Twitter Pinterest LinkedIn