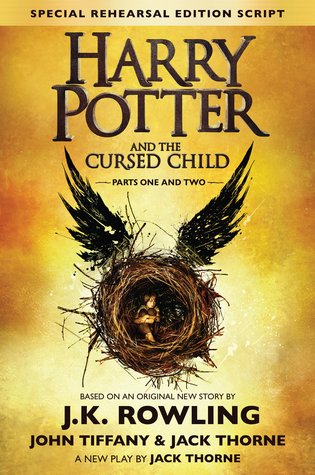 The eight story, nineteen years later …Based on an original new story by J.K. Rowling, Jack Thorne and John Tiffany, a new play by Jack Thorne, Harry Potter and the Cursed Child is the eighth story in the Harry Potter series and the first official Harry Potter story to be presented on stage. The play will receive its world premiere in London’s West End on July 30, 2016.It….Read More
Children's Dramas & Plays
Amazon
goodreads

7 Books Similar to Harry Potter and the Cursed Child, Parts 1 & 2

Serena hasn't been herself lately. She has been having sudden lapses of memory and acting like a completely different person -- one she doesn't like very much. To add to… Continue Reading Posted in: California Los Angeles, Paranormal Fiction
Info / Amazon
More Books like this

Jessa has spent her life dreaming of other worlds and writing down stories more interesting than her own, until the day her favorite character, Finn, suddenly shows up and invites… Continue Reading Posted in: Contemporary, Historical, Science Fiction & Dystopian
Info / Amazon
More Books like this

In a village without sound… For as long as Fei can remember, no one in her village has been able to hear. Rocky terrain and frequent avalanches make it impossible… Continue Reading Posted in: Fantasy Fiction, Teen & Young Adult Country & Ethnic Fairy Tales & Folklore, Teen & Young Adult Science Fiction & Dystopian Romance
Info / Amazon
More Books like this

Samuel has just landed in modern day LA. The last time he has been free of Nefandus was when he was abducted from his home two hundred years ago. He… Continue Reading Posted in: California Los Angeles, Children's Fantasy & Magic Books, Paranormal Fiction, Teen & Young Adult Friendship Fiction
Info / Amazon
More Books like this

A breathtaking sci-fi space saga inspired by astrology that will stun fans of the Illuminae Files and Starbound series. Orphaned, disgraced, and stripped of her title, Rho is ready to… Continue Reading Posted in: Children's Books, Romance, Science Fiction & Dystopian
Info / Amazon
More Books like this