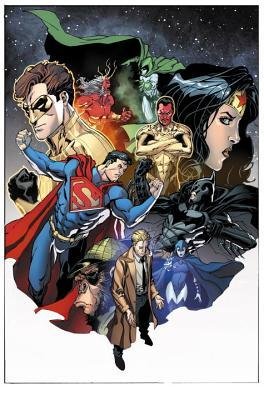 Explore the world behind the smash-hit video game from the makers of MORTAL KOMBAT in INJUSTICE: GODS AMONG US: YEAR THREE.   Both sides of the superhero conflict between Superman and Batman have summoned magical beings of unimaginable power to fight by their sides—but when it appears that neither team can control the forces that they have brought into this war, it may al….Read More
Sequential Art Superheroes
Amazon
goodreads

2 Books Similar to Injustice: Gods Among Us Year Three Vol. 2

The next chapter in the landmark best-selling series INJUSTICE: GODS AMONG US!,On one side: Superman and his Justice League, with their allies in the Sinestro Corps, who sought to bring… Continue Reading Posted in: Sequential Art, Superheroes
Info / Amazon
More Books like this

The best-selling prequel to the hit videogame picks up right where it left off! Year one is over--now, year two begins. The death of one of their own has divided… Continue Reading Posted in: Sequential Art, Superheroes
Info / Amazon
More Books like this
Facebook Twitter Pinterest LinkedIn