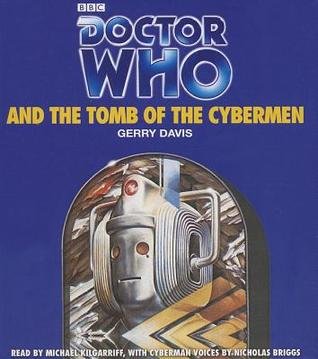 The Cybermen — silver, indestructible monsters whose only goal is power — seem to have disappeared from their planet, Telos. When a party of archaeologists, joined by the Doctor, Jamie, and Victoria, land on the Cybermen’s barren, deserted planet, they uncover what appears to be their tomb. But once inside it becomes clear that the Cybermen are not dead, and some in the gr….Read More
Fiction Media Tie In Science Fiction
Amazon
goodreads

Doctor Who and the Tenth Planet

The TARDIS brings the Doctor and his friends to a space tracking base in the Antarctic - and straight into trouble. A space mission is going badly wrong, and a… Continue Reading Posted in: Fiction, Media Tie In, Science Fiction
Info / Amazon
More Books like this

Doctor Who and the Web of Fear

The TARDIS is engulfed by a mysterious web-like substance in space. Breaking free, the Doctor and his companions Jamie and Victoria land in the London Underground system. But a spreading… Continue Reading Posted in: Fiction, Media Tie In, Science Fiction
Info / Amazon
More Books like this

Over one long, languid summer Edna Pontellier, fettered by marriage and motherhood, gradually awakens to her individuality and sexuality and experiences love outside of her passionless marriage. But as she… Continue Reading Posted in: Classics, Feminism, Fiction
Info / Amazon
More Books like this

Doctor Who and the Genesis of the Daleks

The Time Lords have a mission for the Doctor. Together with Sarah and Harry, he finds himself stranded on the war-torn planet Skaro where the conflict between the Thals and… Continue Reading Posted in: Fiction, Media Tie In, Science Fiction
Info / Amazon
More Books like this

Doctor Who: The Target Storybook

We’re all stories in the end…,In this exciting collection you’ll find all-new stories spinning off from some of your favourite Doctor Who moments across the history of the series. Learn… Continue Reading Posted in: Anthologies, Media Tie In, Science Fiction
Info / Amazon
More Books like this
Facebook Twitter Pinterest LinkedIn