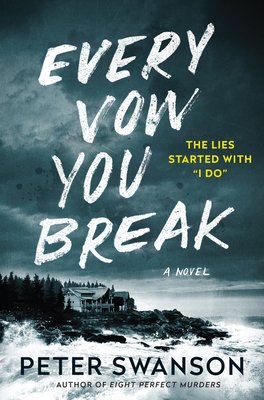 Hitchcockian chills and thrills abound in Swanson’s latest mystery, a twisty tale of survival and deception. – O, the Oprah Magazine A bride’s dream honeymoon becomes a nightmare when a man with whom she’s had a regrettable one-night stand shows up in this electrifying psychological thriller from the acclaimed author of Eight Perfect Murders.Abigail Baskin never thought she’d fall in love with a millionaire. Then she met Bruce Lamb. He’s a good guy, stable, level-headed, kind–a refreshing twist from her previous relationships. But right before the wedding, Abigail has a drunken one-night stand on her bachelorette weekend. She puts the incident–and the sexy guy who wouldn’t give her his real name–out of her mind, and now believes she wants to be with Bruce for the rest of her life. Then the mysterious stranger suddenly appears–and Abigail’s future life and happiness are turned upside down. He insists that their passionate night was the beginning of something much, much more. Something special. Something real–and he’s tracked her down to prove it. Does she tell Bruce and ruin their idyllic honeymoon–and possibly their marriage? Or should she handle this psychopathic stalker on her own? To make the situation worse, strange things begin to happen. She sees a terrified woman in the night shadows, and no one at the resort seems to believe anything is amiss… including her perfect new husband. A vibrant, engrossing, unputdownable thriller that packs a serious emotional punch. One of those rare books that surprise you along the way and then linger in your mind long after you have finished it.” –Kristin Hannah, #1 New York Times bestselling author of The Nightingale and The Four Winds Right. Wrong. Life is lived somewhere in between. Duchess Day Radley is a thirteen-year-old self-proclaimed outlaw. Rules are for other people. She is the fierce protector of her five-year-old brother, Robin, and the parent to her mother, Star, a single mom incapable of taking care of herself, let alone her two kids. Walk has never left the coastal California town where he and Star grew up. He may have become the chief of police, but he’s still trying to heal the old wound of having given the testimony that sent his best friend, Vincent King, to prison decades before. And he’s in overdrive protecting Duchess and her brother. Now, thirty years later, Vincent is being released. And Duchess and Walk must face the trouble that comes with his return. We Begin at the End is an extraordinary novel about two kinds of families–the ones we are born into and the ones we create…..Read More
Mystery Thriller
Amazon
goodreads

12 Books Similar to Every Vow You Break

A kaleidoscopic fictional oral history of the beloved rock 'n' roll duo who shot to fame in 1970s New York, and the dark, fraught secret that lies at the peak… Continue Reading Posted in: Mystery, Thriller
Info / Amazon
More Books like this

With diabolical wit, the author of Tantalize revisits a deliciously dark world where vampires vie with angels -- and girls just want to have fangs.At last, Miranda is the life… Continue Reading Posted in: Juvenile Fiction, Occult Fiction, Young Adult Fiction
Info / Amazon
More Books like this

Who Is Maud Dixon?

Florence Darrow is a small-town striver who believes that she's destined to become a celebrated writer. When she stumbles into the opportunity to become the assistant to "Maud Dixon," a… Continue Reading Posted in: Fiction, Mystery, Thriller
Info / Amazon
More Books like this

The bestselling author of Leonardo da Vinci and Steve Jobs returns with a gripping account of how Nobel Prize winner Jennifer Doudna and her colleagues launched a revolution that will… Continue Reading Posted in: Adult, Contemporary, Romance
Info / Amazon
More Books like this

In his bright debut, Tangerine, author Edward Bloor introduced us to a legally blind kid who, frankly, sees reality a heck of a lot better than anyone around him. Paul… Continue Reading Posted in: Fiction, Mystery, Young Adult
Info / Amazon
More Books like this

The Consequences of Fear

The Kind Worth Killing

Of Women and Salt: A Novel

A sweeping, masterful debut about a daughter's fateful choice, a mother motivated by her own past, and a family legacy that begins in Cuba before either of them were born… Continue Reading Posted in: Contemporary, Fiction, Historical
Info / Amazon
More Books like this
Facebook Twitter Pinterest LinkedIn